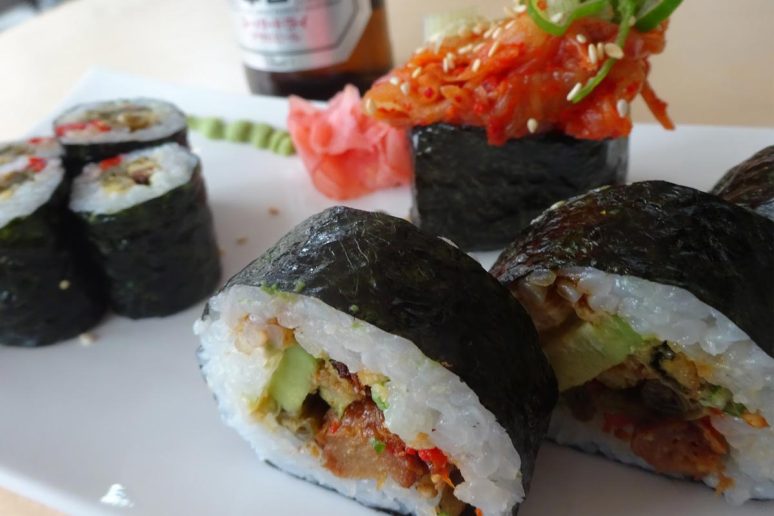 Vegan Sushi: Dining Out or Rolling Your Own

People often ask: is sushi vegan? Unfortunately, sushi typically contains either fish or roe. But vegan sushi is nevertheless widely available in groceries and at restaurants. It’s also easy to make at home. Whether you order it at restaurants or make it yourself, vegan sushi is some of the tastiest food you’ll ever eat.

Sushi is by far the most famous dish in Japanese cooking. It takes an endless variety of forms, from dead-simple four ingredient nori rolls to extravagant offerings that demand years of study for authentic preparation. Luckily for vegans, the complexity surrounding sushi preparation mainly regards the fussy work of cutting up the fish. The butchering of fish for sushi demands expert instruction, especially where the puffer fish is concerned. These fish contain a gland with enough poison to kill thirty people!

By contrast, most vegan sushi is remarkably easy to make. You don’t need much in the way of cooking skills to make fantastic sushi.

Since fish is a default ingredient of most sushi, many enthusiasts assume that it’s mandatory. Nothing could be farther from the truth. Here are some vegan items that are delicious alternatives:

You can have a hard time finding totally vegan sushi in restaurants. That’s because most Japanese restaurants flavor their rice with dashi, a seasoning that provides a umami flavor. Dashi is usually made from fish flakes, but it is possible to make this seasoning from vegan ingredients like seaweed or mushrooms. Unfortunately, it’s a safe bet that the rice at most sushi restaurants contains a minuscule amount of fish.

If you can get vegan rice and also avoid the fish you’re home free—just ask for a nori roll made without seafood or eggs. Keep in mind, though, that the cost of your meal may be unreasonably high—because of lofty fish prices, sushi restaurants are among the most expensive places to eat. It’s unlikely that you’ll get an appropriate discount for ordering fish-free sushi, even though the ingredients that go into your meal could hardly be cheaper.

When eating nori rolls, you’ll be given a shallow bowl in which you’ll pour a little soy sauce. You’ll then use your chopsticks to stir in as much wasabi paste as suits your taste. Next, you’ll use chopsticks to take a piece of sushi, and dip it into your soy sauce. It’s a faux pas to treat nori rolls as a finger food while at restaurants, but when I’m home and nobody’s looking I don’t see the point of using chopsticks. My Japanese friends don’t use them either for informal meals at home.

While it can be tough to get 100 percent vegan sushi at restaurants, many natural food stores carry vegan nori rolls. Just check the refrigerated section, next to their sandwiches and other prepared meals.

If there’s no place nearby that sells vegan sushi, it’s easy to make your own. When it comes to cooking something a bit exotic, no meal is simpler to prepare than vegan nori rolls.

You’ll need sushi rice, veggies, nori, and a sushi rolling mat. Once you get the knack of it, nori rolls are one of the simplest gourmet-leaning meals you can make. YouTube is full of instruction videos for making vegan sushi. Here’s a terrific introductory video that covers the basics, and shows you three varieties perfect for your first attempts. And here’s a longer video showing more ambitious and labor-intensive variations.

Making nori rolls at home offers the perfect opportunity to experiment with the vegan fish products that have recently been introduced. Ocean Hugger Foods makes a product called Ahimi that’s made from tomatoes, yet has a texture and flavor profile shockingly similar to the priciest (and often endangered!) tuna.

Half of what makes sushi special is its accompaniments. At home or in restaurants, try eating slices of pickled ginger and sipping some cold Japanese beer between pieces. Note that store-bought pickled ginger contains artificial sweeteners or red dye, so read labels and opt for a gourmet brand. Japanese-style lager beers, not surprisingly, are the perfect accompaniment to nori rolls. Asahi’s ubiquitous flagship beer sold in silver cans is a delicious vegan choice.

For further reading, please see our Vegan Cooking Guide and our Guide to Vegan Japanese food.